8 of the Best Snow Levels in Games

As much as we hate to admit it, summer is over. The bikinis and beaches have been replaced with parkas and snow shovels. However, the chilly weather gives us all a great excuse to play some video games (as if we needed one) and what better way to experience winter than by making our favorite characters brave the cold in our stead?

When Retro Studios decided to swap the traditional Metroid side view for a first-person perspective, it was controversial. However, Metroid Prime was very well-received and can be considered one of the most atmospheric games that has ever been created. Among the most memorable areas to explore was Phendrana Drifts, a frozen ecosystem with chilling music that makes players shiver as they search for energy tanks and missile upgrades. Samus can even get fog on the inside of her visor as she exhales.

In the original Crash Bandicoot, you could ride a boar. In the second game, Cortex Strikes Back, developer Naughty Dog switched it up and allowed you to ride a baby polar bear, starting with Level 7: Bear It. With the adorable companion and fast pace, it became one of the most memorable levels in the game and the level you could leave on for your younger cousin while you and your other cousins did cool, older cousin stuff. The bear, later dubbed Polar in Crash Team Racing, stayed in the Warp Room barking at you as you selected your level. To sustain the animal abuser inside, you could jump on its head repeatedly and earn a bunch of extra lives. Thanks for nothing, PETA.

I Am Setsuna was the first game released by Square Enix subsidiary Tokyo RPG Factory. In it, a young woman named Setsuna marches to sacrifice herself, much like Yuna in Final Fantasy X. She rounds up a party of warriors to guard her, including the main character Endir, who battle enemies in classic turn-based combat. The entire world within the game is covered in snow, with a soundtrack comprised only of piano melodies that complement the landscape perfectly. The game is worth a play-through despite its linearity. The second game from Tokyo RPG Factory, titled Lost Sphear, does not take place in a snowy environment but it has definitely already been preordered by yours truly.

No series is more I-don’t-understand-what-is-happening-but-damn-it’s-fun than Katamari. Beginning with Katamari Damacy on the PlayStation 2, the series has enthralled and confused gamers of all ages. In each iteration, the arrogant King of All Cosmos does something to effectively destroy the Universe and tasks the microscopic Prince to clean up his mess by rolling items from Earth into a ball to create a replacement star, constellation, planet or other spatial body. In We Love Katamari, the second installment of the series and the last with input from creator Keita Takahashi, the Prince is tasked with rolling up a ball of snow to create a snowman. A remixed version of the level appeared in the PlayStation 3 title Katamari Forever.

This list would not be complete without a title from The Legend of Zelda series. Ocarina of Time featured the Ice Cavern, Majora’s Mask swapped the lava-filled Death Mountain for Snowhead. However, neither of these games included snowboarding. The Legend of Zelda: Twilight Princess, on the other hand, had an addictive snowboarding mini-game atop Snowpeak. To unlock it, Link must assume his wolf form, make his way through a blizzard and find Yeto, whose wife Yeta has been possessed by Blizzeta. After conquering Snowpeak Ruins and rescuing Yeta, her husband will be available to train Link for the next Hyrule Winter X-Games. 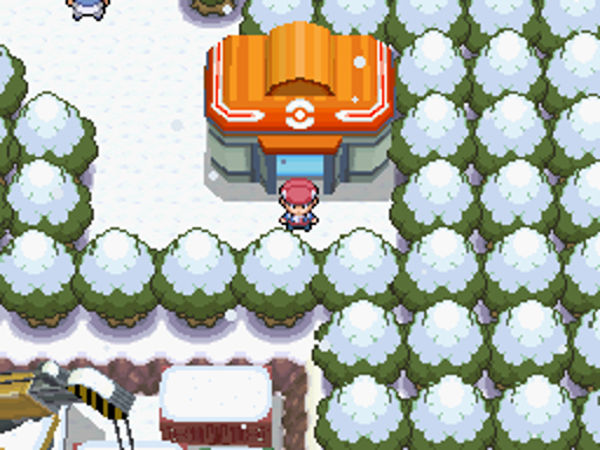 Pokémon Diamond & Pearl were groundbreaking entries in the Pokémon series for several reasons. One of the most notable is that they added the Global Trade Station (GTS) so you could trade with people all across the world – not just your group of friends, stealthily hiding on the school playground while trading in fear of being caught by a teacher. Pokémon Diamond & Pearl were also the first Pokémon games to include snow. Sure, Gold/Silver and Ruby/Sapphire each had their own respective ice cave, but Pokémon Diamond & Pearl took players to a Winter Wonderland when they visited Mt. Coronet and Snowpoint City at its peak. Not only does snow fall intermittently in Snowpoint City, but a diamond dust is programmed to fall every year on creator Junichi Masuda’s birthday (January 12th).

Although it wasn’t the first 3D platformer, Super Mario 64 continues to influence video games today. It completely rethought the Mario formula. Instead of traversing from one side of a level to another, Super Mario 64 placed its titular character in a metaphorical sandbox, giving players full control over where and how they want to explore. Among the new levels was Cool, Cool Mountain. From racing a giant penguin to rounding up much more adorable baby penguins, Cool, Cool Mountain is easily one of the most standout levels in Super Mario 64. Elements of the level, and Super Mario 64 in general are numerous within the latest installment of the series: Super Mario Odyssey.

Never Alone is the least-known game on this list. Taking place in icy Alaska, players alternate between playing as an Inupiaq girl, Nuna, and an arctic fox. Alternately, the game can be played in co-op. The levels within the game are based on stories passed down throughout the history of the Inupiaq people. With their culture threatened by oil drilling and the introduction of the English language to Alaska, the game serves as a way to continue to tell these stories. It also features unlockable videos about how Inupiaq people contributed to the development of the game.

Did I miss your favorite snow level? Be sure to comment to let me know how badly I’ve failed as a writer.