There’s so many ways to make music there beyond the normal orchestra at every philharmonic group in the U.S. If you told me, as a youngling, that instead of the viola I could’ve grabbed a hurdy-gurdy … I could be … a world champion hurdy-gurdy player!

But who knows? The point is that I had no idea that this existed until the composer of The Walking Dead, Bear McCreary, explained where he got the shows long, unique, droning notes.

No one told me there were this many options besides the classic orchestra. But it makes sense; there’s thousands of ways to produce sound. Remember that scene from Miss Congeniality with the wine glasses? They made an instrument of that.

The world is full of really cool instruments that make totally unique noises. A more modern example that music theory fans love, for instance, is the electronic droning of the theramin, which plays notes simply based on where you hold your hands; you don’t even touch the instrument!

New interesting instruments are created every year, especially in the realm of science, engineering, and, as in the case of the marble machine by Wintergatan, tinkering.

This thing is absolutely beautiful and took many, many hours of work and innovation. But some of the most interesting instruments are cheap to make and require very little time or skill to pull together.

The Washtub Bass and Spoons

Making one of these classic Americana bands takes very little money or time. You could also add a shovel guitar or a Folgerphone. (Of course, those who love the classic Emmet Otter’s Jug-Band Christmas already may know of a few of these!)

That’s a band of weird instruments, but there are whole orchestras full of ancient, beautiful, and artfully mastered instruments that you’ve likely never even heard of: the erhu, the dizi, the guzheng, the yangquin, and more. Why? It’s simply because it’s on the other side of the world. But the Chinese orchestra is no less well-respected than the Western one.

Chinese music has a unique sound because it has some uncommon instruments to Western ears. But there’s a whole array of ancient ones that need quite a bit of skill, and they’re cool instruments to learn.

The coolest? Probably the Sheng.

So, here is an interactive list of 100 of world’s musical instruments that will allow you to click, listen, and learn: 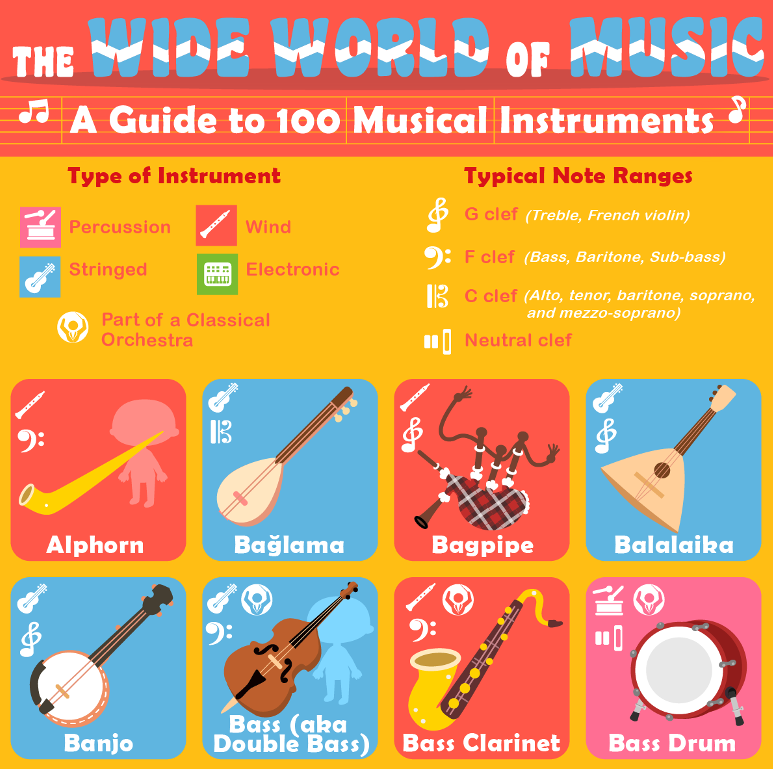 Click the above image to visit the interactive version!

This is just a sampling of the most unusual instruments in the world. They can get even weirder! Last, we leave you with an instrument that plays with the power of lightning! (It uses a Tesla coil!)